Shalu is the first human robot in the world that is made from the waste material. It is mainly used for doing housework and she is having full knowledge of the social and education. She also can speak 47 languages which include 9 Indian languages and 38 other languages.

Shalu was invented in Mumbai by a computer science teacher named Dinesh Kunwar Patel. He is a school teacher of Kendriya Vidyalaya. Dinesh lived in the small village named rajmalpur of Uttar Pradesh. It is very much similar to the Sophia robot but can do better work than the Sophia robot. This robot is considered as the top 10 robots by many magazines.

The school is using the Shalu robot for teaching the sixth standard students. Shalu also spread the message which was declared by the government for making the distance and wear a mask for protection during the covid-19 times.

Shalu is one of the humanoid robots similar to the Sophia and enthiran. Dinesh took the inspiration from the other people who made the robots like S. Shankar, Hanson robotics. Shalu was developed at home by using various waste materials like aluminium, plastic, cardboard, wood, and many more materials.

Dinesh had worked on the robots for 3 years for making Shalu. It was discovered in the world on 23 November 2020. For making Shalu it only took 50,000 rupees. Shalu’s brain system was developed by using the open-source libraries like TensorFlow, NLTK, and many more.

Shalu’s next version robot is still in progress. Shalu has made the Indians proud in the field of robotics. Shalu can easily compete with the new technology computer robots very easily. Shalu can even provide the people with the latest ten days weather reports. 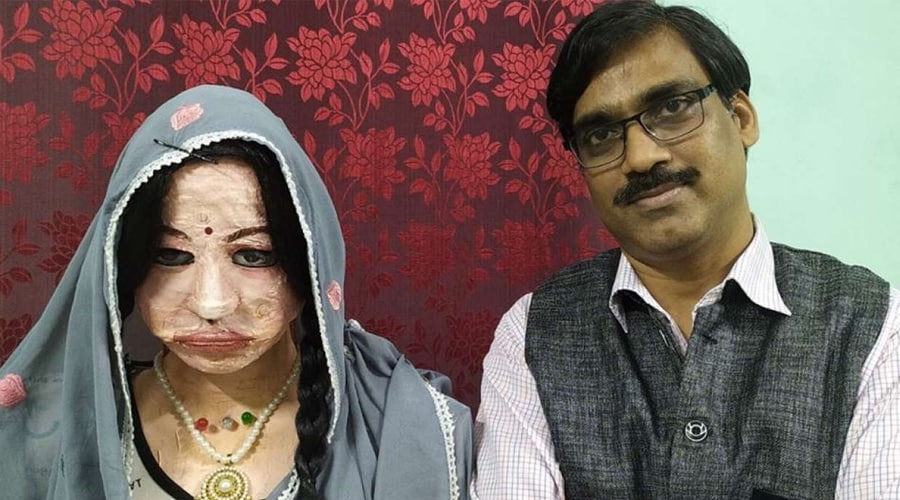 Shalu can easily speak and understand 47 languages which are 9 Indian languages and 38 foreign languages. The Indian 9 languages are:

The 38 foreign languages include English, Nepali, Japanese, German, French, Italian, Chinese, Spanish, and many more other languages. She can recognize people after some time and even recognize some objects which are commonly used. Just like humans, she can also understand the emotions such as anger, happiness, laughter, and other emotions. She also behaves like a human in various situations.

She can also recite poems, shake hands with people, and many more as the human does the activities. She performs all the activities which humans can perform easily. She can even resolve some questions according to the artificial intelligence script added to her. She can solve normal math questions, understand the normal conversation, problems of speed and distance, current news, and other activities. She understands the subjects like physics, chemistry, mathematics, history, geography, and even other subjects.

She is also having the ability to give a lecture to the students as per the PowerPoint presentation which is installed in the mind of the Shalu, she can even ask questions, answer the queries of children. She is having all the qualities of a good teacher. She can even work with the senior citizen and young children as a talking companion or a learning companion.

She has also taken part in the Beti Bachao Beti padhao mission and digital India mission.

Education minister and government of the India tweeted about the facts of capability and materials which are used in making the Shalu. They tweeted on 20 March 2020. Professor Supratik Chakraborty also appreciated the letter which was sent to Patel. He also said in the letter that it is a great development.

These robots are also used for education, entertainment, and many other. Such robots are the inspiration for the upcoming scientist of India.

Dinesh Patel was awarded the Jagran josh educational award on 25 march 2021 for a wonderful invention in the world. This was awarded to him by the educational minister of the India. On this occasion, Dinesh said that he wanted to make these robots for making the learning easy and beneficial for the students.

These robots are very beneficial for the students who are very much eager to study but are not able to afford them. these types of robots are examples and inspiration for the upcoming scientist.

Conclusion:
Shalu is considered as the one of the best inventions in the field of human robots. She can do every work just like humans or much better than humans. The ability of thinking and doing work is very good. She can do every subject like physics, chemistry, history and many more. She can easily speak the 47 languages of the world. She can even ask and do questions related to any subject very quickly. She can even understand the emotions of the humans and react accordingly.