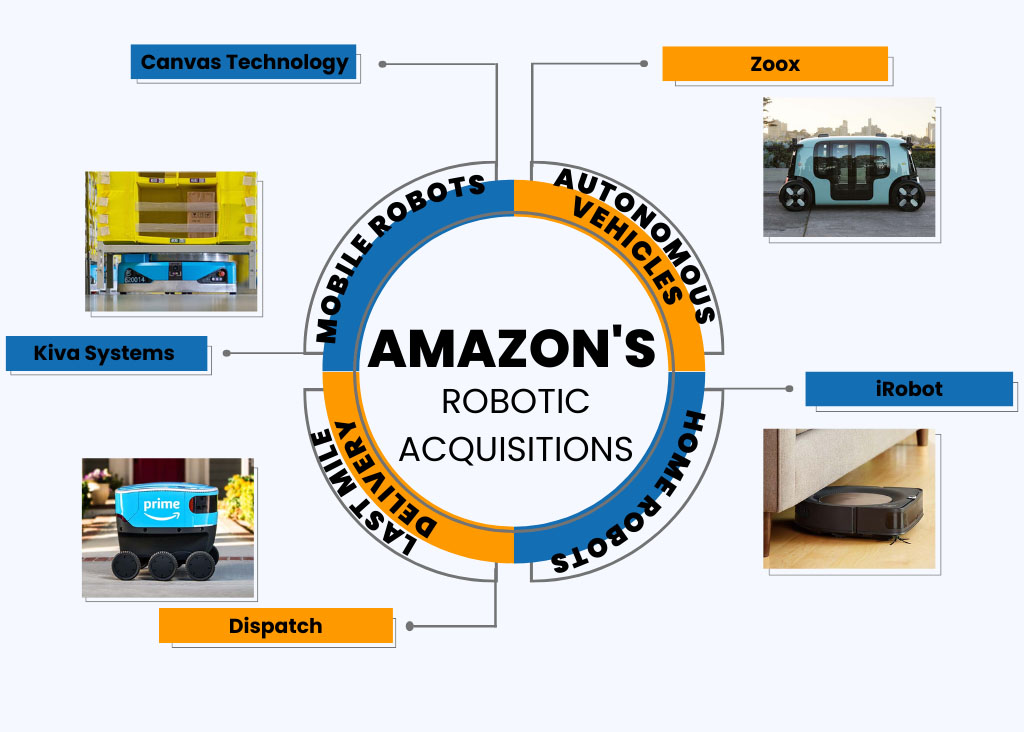 A decade after Amazon made its first foray into robotics with its acquisition of Kiva Systems, the e-commerce giant is acquiring iRobot for $1.7 billion.

While completion of the transaction is still subject to customary closing conditions, the deal expands Amazon’s already extensive robotics portfolio. Here’s a look at the company’s robotics acquisitions and some of its investments and notable robots developed internally.

It’s impossible to talk about Amazon’s history in robotics without talking about Kiva Systems. Amazon acquired the mobile robot company in 2012 for $775 million. At the time, it was Amazon’s second-largest acquisition ever.

Kiva initially continued to provide mobile robots to its existing customers, but that quickly came to an end. And in 2015, it became Amazon Robotics. Kiva’s automated guided vehicles (AGVs) use computerized barcode stickers on the floor to navigate Amazon’s warehouses.

Amazon Robotics recently announced its first autonomous mobile robot (AMR), Proteus. It does similar tasks as the Kiva robots, but can work freely around Amazon workers instead of caged off areas. Amazon quietly acquired Dispatch, a last-mile delivery company, in 2017. It utilized the company’s technology and expertise to create Scout, which it announced in early 2019. The six-wheeled sidewalk delivery robots are fully electric and travels at a walking pace.

Zoox, an autonomous vehicle developer, was acquired by Amazon in 2020 for an undisclosed amount, although reports suggested Amazon paid $1.2 billion for the company. At the time, Amazon worldwide consumer CEO Jeff Wilke said Amazon was excited to help the Zoox team bring its vision for a zero-emission autonomous ride hailing service to reality.

Soon after the acquisition, Zoox unveiled its autonomous vehicle for the first time. Since then, the company has expanded its testing to Seattle, its fourth testing city, but things have been mostly quiet from the company.

Amazon plans to acquire iRobot for $1.7 billion, over double what it paid for Kiva Systems, at $61 per share in an all-cash transaction. If the deal closes, it will be Amazon’s fourth biggest acquisition ever.

iRobot isn’t the company’s first venture into household robotics. In September 2021, Amazon unveiled Astro, essentially an Echo Show 10 on wheels. The robot can be used for home monitoring, video conferencing and entertaining children.

iRobot will certainly expand Amazon’s consumer robotics portfolio, although iRobot has recently been diversifying its portfolio with non-robotics products. It acquired Aeris Cleantec AG, a Switzerland-based developer of air purifiers, in November 2021 for $72 million. Earlier in 2021, iRobot introduced its H1 handheld vacuum, its first non-robotics product.

Amazon has made a number of other investments in robotics companies. For example, it participated in a $530 million Series B round of funding for autonomous vehicle developer Aurora Innovation in early 2019.

The post Inside Amazon’s robotics ecosystem appeared first on The Robot Report.