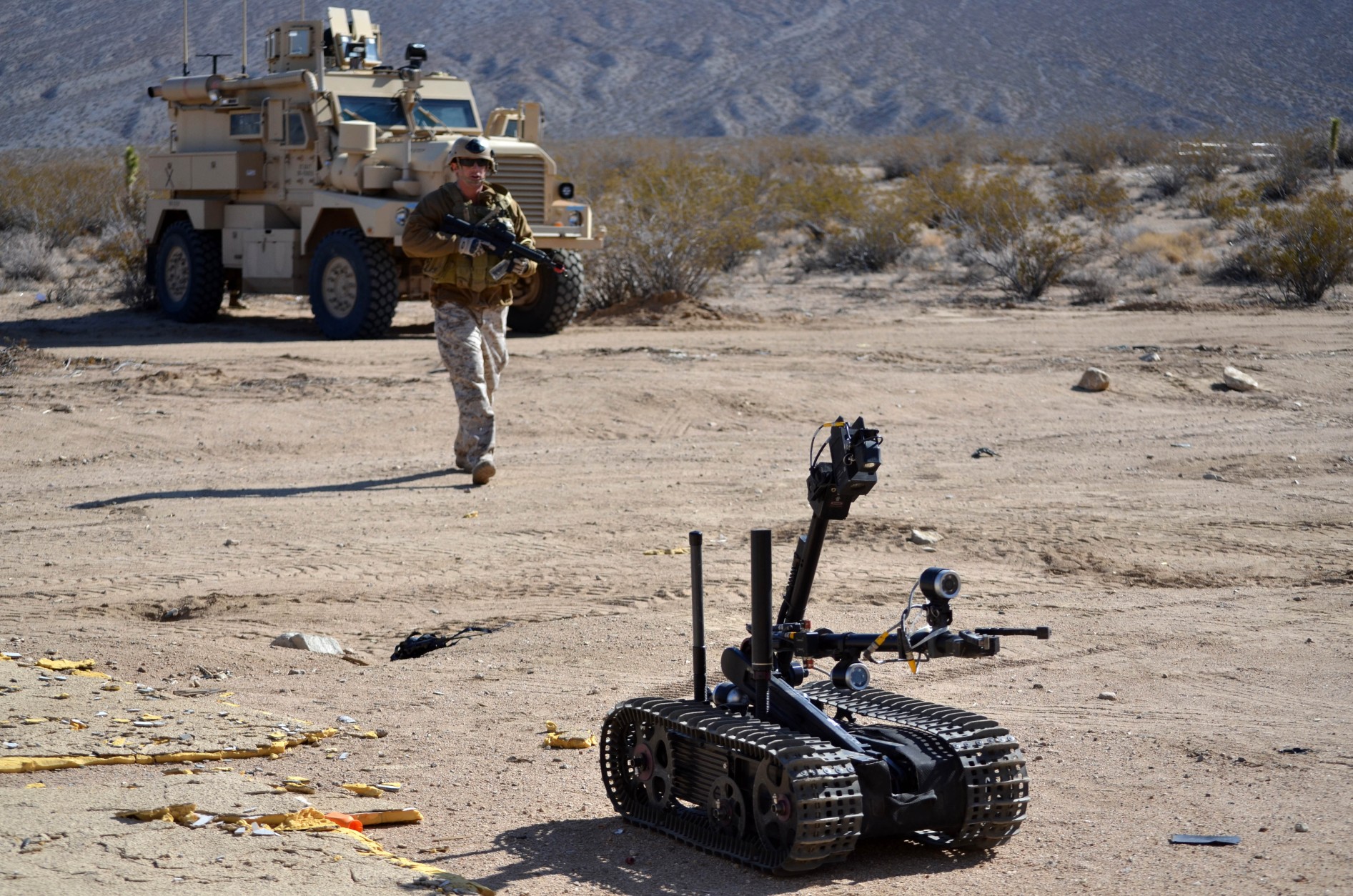 Military robots can be remote-control robots or automatic robots. These are mostly designed to search the military person and rescue the person and also attack according to the situation. Some robots are designed and some are under inventions.

Military robots are not new for the armed forces as they are using these robots for several years in many parts of the world. Military robots provide a quick backup plan when there is a huge fire and reduce the number of problems faced by military members.

These robots are available in different sizes and different shapes. The user can buy them according to the requirement.

These military robots are tested in World War 2 and the cold war in the form of tele tanks or the mines. The military robots of the future are made attractive and very useful in the military. Some people believe that future wars would be fought by weapons that are automatic.

The U.S. is also trying its best to develop new inventions related to weapons or robots for the army. Some automatic jets and bombs are promised because the robots would be having lack training. It would be helpful in a dangerous mission.

These military robots are very useful in the many missions which were held in Germany and the Soviet Union. There are various types of military robots which are as follows:

These are mostly designed for transporting the military from one place to the other. These also help to transport the bombs, artillery, and many more things. These robots are designed in such a way that they can easily move on difficult terrains easily.

They can move on legs or wheels that are also attached to move fast. We know that the person who is on a dangerous mission gets a lot of money but they are also humans. They also deserve to live so the robots can be used in that place when there is a risk of life.

These are very useful when the person in the military is to be found or rescued their team member from the other team camps. These are also helpful when there is a flood, earthquake, or any other natural disaster.

These robots are used for shooting purposes as these robots have weapons.

These robots are designed for investigation purposes. They can even fly. In the future, these robots may fight or have bombs fit in them.

The most designed robots are the unnamed ground vehicle robots. These robots do their work on the ground.

How do military robots work?

The armed forces are doing the most difficult work than the normal people. Some difficult tasks which are assigned to special persons of the army are walking in the field of mines; detect unexploded bombs and various other tasks. But when we use robots instead of the military people’s lives would be saved and only a small amount of money could be destroyed. So various countries are trying their best for making robots for these purposes.

1. Small bots: talon
These are mostly used in the army these times. It is small in size and looks like a small tank. It has different sensors with audio and video. It can tackle all the climatic conditions.

2. Small bots: Pickton
It is smaller in size and lighter than the talon. It works like a GPS system. This can easily find out where the combatants are hidden.

3. Small bots: matilda
It is as same as the other small robots but it is designed as a professional. The weight of the matilda is around 28 kg because of the batteries fitted inside it. It is having many sensors with audio, video, camera and it can even tow a small trailer.

4. Big bot: ACER
Most of the large robots are made of trucks or tankers with computers so that they can be remotely controlled. ACER is also designed in the shape of a bulldozer. It can easily handle difficult and big tasks very easily. It can easily cut or clear the obstacles which come in between.

6. Flying bots: global hawk and pointer
This robot is mainly designed for reconnaissance. It is remote-controlled. Its length is 44 ft and its wingspan is 116 ft. its speed is basically 403 mph.

Advantages and disadvantages of the military robots

How does the military use robots?

There is a variety of robots that are used in the military. The military is mostly using these robots for the disposal of bombs and reconnaissance. Some robots are light in weight and some are so heavy. They are designed for the usage of these robots on the battlefield. If the military will use this technology, then this will show the positive effects. It will save the life of the military people and even money.

1. MARS: it is small in size. It has the firing weapons for destroying the enemy very easily. It has a laser system that can tear the gas.

2. DOGO: it is designed in such a way that anyone sees DOGO he/she will say it is a toy. It is very much small in size. It has a camera inside it which gives all the details to the military people and it is also having a 9mm pistol inside it.

3. SAFFiR: this robot is designed to extinguish fire easily. It can handle high temperatures. It is such in development but it will come as faster as it can be.

4. Guardbot: it is not important to have robots which are having some weapons. It is designed for search and rescue purposes. It can send the details easily to the military camps.

5. Gladiator: it just looks like a tank. It is containing many weapons.

6. Alrobot: it is made by the two brothers and it carries the heavy material on the Iraq desert on the 4 wheels very easily. It can move on extremely harsh surfaces. It can easily reduce the risk of human life.

7. Anbot: Anbot is one of the robots designed by the country’s national defense university. It is also known as the police robot. It moves at the speed of 11mph and is used in the patrol areas.

8. RoboBee: it is made by Harvard’s micro biotic laboratory. It is very small in size and can fly easily through the wall. This audio, video, and camera are fitted inside this robot. It is very useful to listen to the meetings which are held in the enemy camp. It also helps in non-military operations.

9. PD-100 Black Hornet: it is one of the flying robots which is in the shape of a helicopter. It contains a camera that allows the user to get live video.

Nowadays there are a variety of robots which are introduced and very helpful. In the coming time, all the work would be done by the robots. No field would be left where there are no robots. The military is also using robots for getting the information of the enemy and even for searching and rescue the person.

These robots are available in different sizes and shapes. They are designed as per the use theirs. Some are so light in weight and some are so heavy. The military is using them for transporting the heavy materials from one place to the other or diffusing the mines which are settled on the ground as they are not easily visible or to protect their lives in the dangerous mission.

There many advantages of using these robots but there are disadvantages of military robots too. In history, robots are also used in World War 2 and some cold wars. In these wars, these robots show the positive effect. They are very useful in the dangerous mission in which the military person is involved.

They can do the work very quickly and without any problem. As we know that army people are always ready to die for their country but their life is also precious. So, these robots are made to save their life in a mission where there is a risk of their life.

These robots can be sent to the place where there is extremely cold or hot where the people cannot stay. They also do not require food to eat and they can perform their work efficiently. A lot of money can be saved.